Girl Scouts of Colonial Coast held the 2022 Famous Formers awards luncheon on September 15 at the Hampton Roads Convention Center to celebrate 110 years of Girl Scouting, its legacy of leadership, and the women dreamers and doers who come from the Girl Scout ranks.

GSCCC honors Girl Scout alum, women in the community who were Girl Scouts as girls, and who have distinguished themselves as outstanding role models for girls and women through their professional and volunteer achievements. All honorees are women living in southeastern Virginia or northeastern North Carolina.

Honored posthumously were three Girl Scout alum who were portrayed in the film “Hidden Figures”, three brilliant African-American women—Katherine Johnson, Dorothy Vaughan and Mary Jackson. Our special guest speaker was Jay Johnson, a lifetime Girl Scout and professional storyteller. This Girl Scout alum grew up in Hampton, Virginia and had the good fortune of being part of a Girl Scout troop led by Mary Jackson herself, who became like a second mother to Jay. (Read more about Jay in this feature from Virginia Peninsula Magazine.)

Meet our honorees in this series of video spotlights! 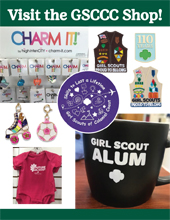